Well 2018 is just about in our rearview mirror. We had a GREAT reunion this year. The next reunion in 2020 will be in Jacksonville, FL

I will be sending out more details about it in 2019. Hope to see ya’ll there.

I and my family wish all of you a MERRY CHRISTMAS and a HAPPY and HEALTHY 2019.

I received this card from Bruce Barth and thought I would pass it along for all to enjoy. Vintage 1951. 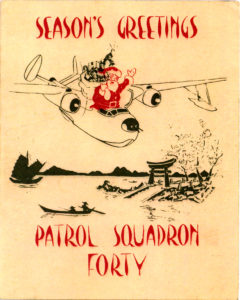 also this letter from days of old:

by CAPT Victor Delano, USN (Ret.)
During the Korean affair, USS Wedderburn (DD684) had picked up a Christmas tree just before leaving port. During routine patrol operations, however, the ship encountered heavy seas the Yuletide tree was washed over the side. There was little hope of getting another one.
On 22 December 1953 a PBM “Mariner” of Patrol Squadron 40 operating out of Sangley Point, P.I., flew within radio range of the destroyer and made its routine radio contact with the ship. On this particular night the ship had an additional message for the seabird.
“Watchdog to Charlie Able Four. Watchdog to Charlie Able Four, Over.” “This is Charlie Able Four. Go ahead Watchdog.” “This is Watchdog, How are you fixed for Christmas trees? Over.” “Say again your last transmission.” “This is no joke. We want a Christmas tree. Can you get us one?”
The aircraft pilot didn’t offer a definite yes or no but said he’d try. Whether the ship’s crew took this message with some skepticism or not, it’s hard to say; but it’s safe to assume that there was at least a wild hope. The seaplane returned to Sangley Point and reported the request. VP-40, it seemed, did have a mission schedule for Christmas Eve and it would pass in the immediate area of Wedderburn. So a tree was wrapped in burlap cloth and small, pocketsize, waterproof flashlights were pinned all over it. At one end a float was attached. Back on board the destroyer it was dark. The messenger was making his rounds waking the men who would soon be standing mid-watch.
Breaking the quiet of the chilly Christmas Eve was the sound of an airplane engine and an officer on the bridge hear it. Radio contact was made and ship and plane identified themselves. Then the aircraft came through with:
“We have a bundle for you. Where do you want us to drop it?” “Just forward of the bow.”
The patrol plane circled. On the second approach an airman opened the port hatch and shoved the brightly-lit bundle out into the night.
“Merry Christmas,” said the pilot, “Here’s your tree.”
via Bruce Barth Collection