The Museum is hosting a Welcome Home Vietnam Veteran’s Ceremony on Saturday, March 11th at Noon. All Vietnam Era Veterans and their families are cordially invited to attend. We also welcome all Veterans and patriotic Americans to join us as we honor the service and sacrifice of those who served during the Vietnam Era.

Our honored guest speakers include Chris Bischoff, Captain US Army Special Forces. Also speaking will be Vin Dao, Colonel, Vietnam Air Force, who served as a pi…lot from 1964 to 1975.

As we observe the 50th anniversary of the Vietnam War, we reflect with solemn reverence upon the valor of a generation that served with honor We pay tribute to the more than 3 million servicemen and women who left their families to serve bravely, a world away from everything they knew and everyone they loved. From Ia Drang to Khe Sanh, from Hue to Saigon and countless villages in between, the pushed through jungles and rice paddies, heat and monsoon, fighting heroically to protect the ideals we hold dear as Americans. Through more than a decade of combat, over air, land, and sea, these proud Americans upheld the highest in traditions of our Armed Forces.

The President of the United States of America proclaimed May 28, 2012, through November 11, 2025,as the Commemoration of the 50th Anniversary of the Vietnam War. Admission to the Museum will be free for all Vietnam Veterans and 25% off for ALL other visitors. All Vietnam era veterans* will be presented with a VIETNAM VETERAN LAPEL PIN, “A Lasting Memento of the Nation’s Thanks!” 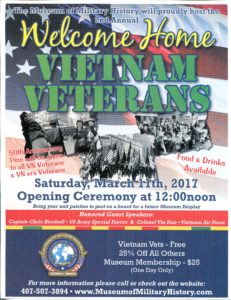 “A Lasting Memento of the Nation’s Thanks!”