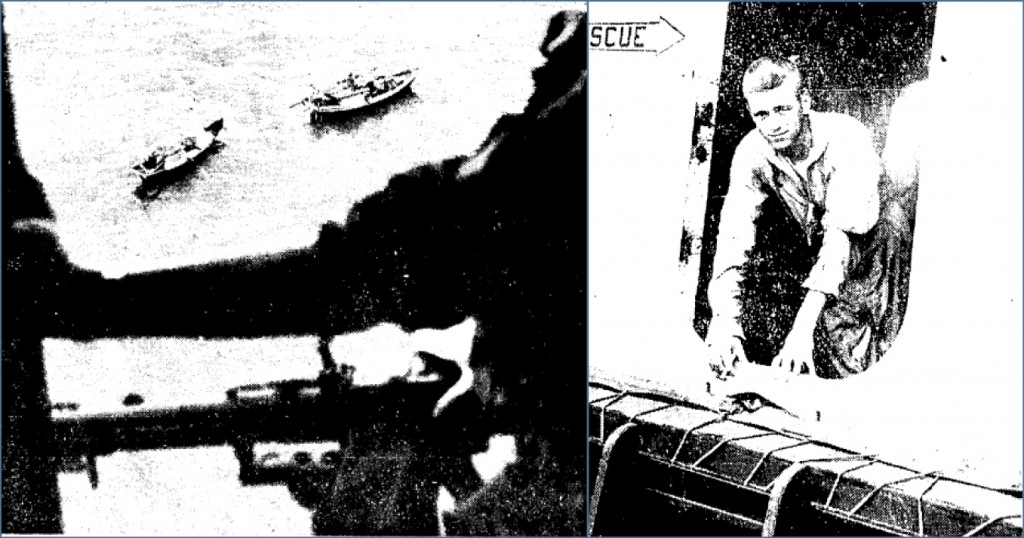 ABOVE THE GULF OF SIAM— To port broods a snappish tropical squall, and to starboard loom the opaque peaks of Phu Quoc Island.
Between the two ominous shapes, the little Martin P5M seaplane pursues a hairline radar course, across a chart tangled with disputed international boundaries.

For five hours the slow, awkward, all but antique patrol plane has been droning down the Vietnam coastline. Past midnight she blasted off Cam Ranh Bay with rocket boosters, and since, she has prowled south along a secret track. She has kept an electronic eye out for Russian trawlers, and her magnetic gear has probed the depths for unfriendly submarines.

Time and again the ultrasensitive radar of the seaplane has detected surface shipping in the South China Sea and in the Gulf of Siam.

By radio, by light signals, she has asked each ship for identity. Some ships have not responded, and each time the seaplane has dived to a few hundred feet, illuminated the ship with a powerful searchlight, and reported the ship’s size, course and position.

This is a vital facet of operation Market Time: in effect, a blockade of the coast of South Vietnam.

Since Feb. 1, more than 20,000 junks have been boarded and searched by the U.S. Navy and Coast Guard. The success of market time is not only in the 40 junks of contraband seized, but in the closing of sea lanes to the Vietcong.

AND NOW the seaplane is halfway around Phu Quoc, an island nudging the border of Cambodia and Vietnam. Running lights are extinguished. Altitude and elevation are just beyond range of small arms.

Until last night, Phu Quoc has been 99 per cent Vietcong territory. Now it is all Vietcong. In the time since takeoff, the enemy has overrun the only American Special Forces camp remaining on the island.

“If we see any action,” says Lt. (jg) Neil P. Rogers, “this is the likely spot. We can’t be sure who it will be. Sometimes we have our navigation questioned by people who have other ideas about Cambodian air space.”

On this mission Rogers is standby navigator for the P5M. As dawn begins to tint the top most thunderheads, he and fellow Arizonan AXAN Walter H Miller, team up to rig an M-60 machine gun in a side door. The airplane mounts four such guns.

ROGERS shouts to be heard over the roar of engine and slipstream: “Our first mission….first part of March…..we weren’t armed! Any old junk sailor would wander onto deck and pot at us with rifles!”

P5Ms returned home with bullet holes. A slug ricocheted around one seaplane and came to rest in a galley fry pan. Another bullet expended itself in the navigator’s chair, injuring the occupant’s pride more than his person.

“Then we started shooting back,” Rogers bellows. “That made Christians of all the junk sailors THE NOISE, the vibration, the strain of propeller driven flight marks the faces of the young crewmen. Their eyes are bleary from catnaps, and with grimy fingers they scratch at itching stubble. They spell one another at duty stations for hot bacon sandwiches and robust coffee.

Phu Quoc slides beneath the horizon, and once again the P5M is skirting the Vietnamese coast. Now she is closer to shore, the crew peering at the plankton-like Asian shipping, and reporting suspicions to the central command of Market Time.

On the outbound leg, the night skies over South Vietnam flashed and glowed with artillery fire and flares, and now, as the morning wears on, smoke and fire rise off the tortured land. An inland Vietnamese fortress is under siege. Offshore, an American destroyer trains its main batteries upon a jungle slope. Navy bombers strike again at a paddy land birm.

BELOW the P5M, a Coast guard cutter has a junk dead in the water under its guns, and a boarding party is afloat. It could be a junk fixed by the P5M, a junk laden with rice and munitions for the Vietcong.

It is not the most dramatic or dangerous work of the war. But it is wearisome.

The aging dowager of naval aviation waddles across the thermals of the Cam Ranh peninsula, and with a great moist sigh, settles into the blue satin of the bay. With no more than a day of rest, she and her crew will be aloft again, headed for Phu Quoc Island.