I was informed from Bud Taylor that Bob Foss passed away.

IN THE CARE OF

On December 5, 1953, Robert married Martha Dilks at the Little Chapel of the Roses in Chula Vista, CA. After leaving the service, Robert worked at the US Postal Service until 1986. He retired from the Naval Reserves in 1990. Robert was a member of the Sacred Heart Church, Knights of Columbus, and the church choir. He kept busy in retirement working part-time jobs and enjoying his family.

Fond memories and expressions of sympathy may be shared at www.mclarensresthavenchapel.com for the Foss family.

We had a great reunion in San Diego. Although we only had 27 people show up we made up for it.

Sorry for all those that could not make it.

We voted at our business meeting to have our reunions EVERY year from now on. The reasons should be evident to everyone.

We will also  start having reunions somewhere in the middle of the USA, i.e. Nashville-San Antonio- Branson

etc. voted on and decided at the reunions.

The reunion for 2023 will be in Nashville, TN in Sept. I do not have the dates yet. Will try and book the same hotel as 2016. The Opryland Hotel.

Here is the link to download or view the pictures from the 2022 reunion.

I talked to the Ops Officer in VP40 yesterday.

I was hoping  that VP40 could fly a P8a down for our reunion, but they will be on deployment at that time.

damned   it would have been nice to pull that off. Maybe next time. We discussed the possibility of holding the next reunion at Whidbey Island or Seattle. H said try about 1 year out as the officers should be still there at reunion time.

I will try and get another squadron to attend this year.

IF you have not made your hotel reservations the date has passed to ensure our rate. It will be 1st come 1st served now.  Please contact former VP40 people and ask them to attend. We are still far short of our usual turnout. We WILL hold our reunion this year, next time ????????? maybe. OR this might be the end of an ERA.  Join us for a trip down memory lane.

There is an info file on the reunion tab for attendees to use.

The merchandise page is now up, the arrival/departure tab is working and the login is

working also.  The latest roster is on the members page now.

take a look. Let me know if you have problems

I have talked to James Oliver’s nephew. Gary found me in 2017 via this website and I put them together again.

I hate to bear bad news, but my uncle, James Oliver, VP-40 plank owner, passed away last Saturday August 6th. James and I have been in continuous communication since 2017 speaking by phone at least once a week and sometimes 2 or 3 times per. He had an amazing life and was a living history book of aviation stories. Most of my career was in aerospace, specifically the turbine engine business. Garrett, AlliedSignal, GE and James and I could speak quite fluently about aviation/aircraft (except for avionics … lol as a pilot he could talk circles around me with regard to cockpit things). James’ (I learned that he was never called “Jim”, for some reason my mother used that name but James would react quickly if “Jim” was used) memory was sharp as a tack until the end. Simply amazing the stories, names, and dates. In fact, a few weeks ago we were talking about North Sentinel Island and he wasn’t sure where it was. I had my computer open and told him the lat/long and he instantly told me what was around that island. Anyway, he was an amazing guy.

I have no other info yet with regard to any services. Also, James never disclosed his real age … best I can say is he was around 94-96. He will be dearly missed but I consider myself very fortunate to have known him for the years that I did.

Remember the PBM-5 model I have? The one James had hand made of his plane? Would VP-40 be interested in owning it and becoming caretaker? It is large (maybe 32 – 40″ wingspan) with functional elevators, completely handmade of wood with hand made stringers, skin, etc so it is fragile. Not to mention it is 72 years old. James had it made in Japan by a model maker while he was stationed there.

Gary will attend our reunion this year and bring the model with him to donate to our VP40 group.

THANK YOU GARY. I accepted the offer to take custody of the model plane for our group.

If you want to see this beautiful plane, you MUST attend the reunion. come on out and enjoy it. We will discuss the future of this group at our business meeting. WE have compiled quite a bit of “stuff” and we must decide what to do with it. As of now I have it in my procession, but that could change??

I am sorry to announce the passing of James Oliver. 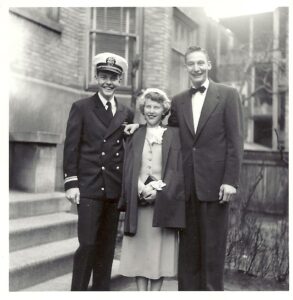 1953, James in uniform with his younger brother, Paul and his wife.

If you remember him reach out and welcome into our group.

If you do not remember him you can still reach out to him.

He now resides in Ocala, FL.

I have had 4 people fill out and send me the registration form for the reunion so far.

Please DO NOT wait until the last minute to do this. I have to have a head count for the hotel and food etc.

well ahead of the reunion date. We will have to pay for those numbers, and you might just miss out on something. I reserved 50 hotel rooms per night and I need to know ASAP if this is a good number or not. Email me or call me with the info.

thanks and hope to see you all there in Oct

We finally have the info to book rooms for the reunion.

I have also added he registration form. Please fill it out and mail it back to me with the money.

I WILL EMAIL THE RESERVATION FORM TO EVERYONE I HAVE A VALID ADDRESS FOR.

I will start adding a list of attendees on that tab.

Do not wait….. reserve your rooms and your meals etc.

Lets make up for the missed reunions we could not have. Hope to see you all there

Thanks for all of you that responded to my post about dues payments.

We will keep this group alive and well.