On July 27, 1953 after 2 years of peace negotiations, a cease-fire of the Korean War was called at the 38th parallel, the major dividing line in Korea.

Stalemate leading to the Cease-fire
(July 1951 – July 1953):
The later years of the war involved little territory change, large-scale bombing of the north and its population, and lengthy peace negotiations, which began on July 10, 1951, at Kaesong. Even during the peace negotiations, combat continued.

On November 29, 1952, U.S. President-elect Dwight D. Eisenhower fulfilled a campaign promise by traveling to Korea to help end the conflict. With the U.N.’s acceptance of India’s proposal for a Korean armistice, a cease-fire was established on July 27, 1953. 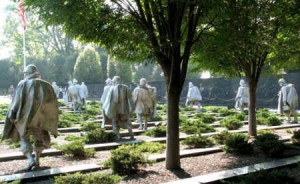 Above: To the south, is a 164 foot long black granite wall, created by Louis Nelson, with photographic images sandblasted into it depicting soldiers, equipment and people involved in the war. The third side of the triangle, facing towards the Lincoln Memorial, is open. 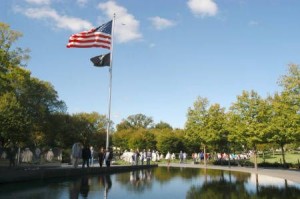 Above: The circle contains the Pool of Remembrance surrounded by granite blocks with the casualty numbers of the war engraved and the inscription:

“Freedom Is Not Free“, posted in silver.

We send our prayers to all who sacrificed, both past and present, living and deceased. Thank You to our Korean War Veterans…along with ALL of our U.S. Veterans and active Military!